There’s no I in Closer

Top performing Account Executives have a lot of different qualities that make them successful. In previous posts we discussed listening to the customer, asking the right questions during discover, and the right way for setting up next steps.

This time we analyzed over 500,000 sales conversations to uncover the difference in language and vocabulary usage between high and low performers. We started out with a few ideas:

Let’s dig in to the findings.

How did we arrive at these results? we searched for different usage patterns of the most common 2-word phrases (e.g. “how are”, “it is”). If there were no difference in language usage we would expect such phrases to be just as common for high performers and low performers. However, what we found is that phrases that include the word “we” in the collaborative sense were much more common for top performers. On the other hand, phrases that include the words “I” or “you” were much more common for low performers than for high performers. See graph below.

Bottom line: high performers use inclusive and collaborative language when describing their teams and their relationship with the customers, whereas low performers are more factional,  separating themselves from their prospects and de-emphasizing empathy. 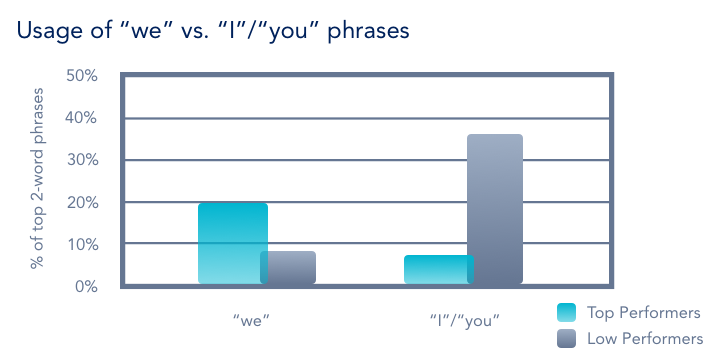 Another hypothesis we wanted to test with our data was the confidence of assertions made by reps (e.g. “our product can definitely solve this” is better than “our product might be able to solve this”).

We found that high performers use words such as “definitely”, “absolutely” or “certainly” in 1 out of 10 sentences. Low performers, on the other hand, demonstrate such confidence only in 1 out of 50 sentences.

What does that sound like? Here’s an example of confidence when overcoming an objection about the pricing or payment:

“… We could definitely come up with some sort of creative payment terms in terms of bi-annually or quarterly or, or something that will that will work for you guys. We can absolutely do this, um, depending on what your needs are.”

And another example from our own calls positioning Chorus’s ability to join online meeting rooms:
“Yeah absolutely so we actually have seamless integrations with all the Saleslofts and Outreaches of the world so, um, yeah exactly right.”

We found this language typical of reps responding to objections or questions with creative solutions and driving their point as they walk the prospect through a solution.

To measure the vocabulary richness of a given sales rep we randomly chose 10 hours of each person’s calls and counted the number of distinct words that appeared more than once. Importantly this does not measure how much information was conveyed but rather how eloquently the rep spoke, i.e. how rich his or her vocabulary was.

To better understand this we looked at the words low performers were missing in comparison to the top performers in the same company. The missing words were part of the company’s sales vernacular and were related to their products and offerings, i.e. part of the in-depth knowledge of a specific product that new sales reps always have to learn.

In other words not only were low performing reps pitching less eloquently, but in fact they were missing critical vernacular related to the the product they were selling. 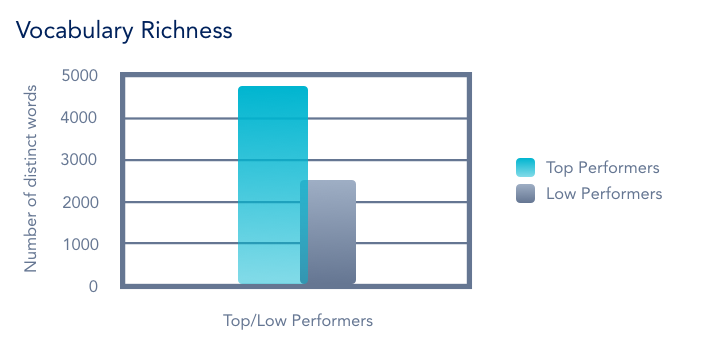 Comparison of the words and expressions used by top performers and low performers shows a real difference between the groups. Some of it is related to saes craft: preferring the use of “we” over “I” and “you” when describing the sales process and next steps, as well as being able to resolve objections in a convincing and confidence-inspiring manner. We also tested the hypothesis that a critical part of sales craft is the ability to mirror the prospect’s words, but we saw no significant difference there.

A second difference lies in knowing and mastering the vernacular of your vertical and product, and simply knowing everything you need to mention and the right words for it.

Our analysis of the language patterns employed by top performing reps is an ongoing endeavor, and in future posts we plan on sharing additional findings distinguishing top-performing reps from their peers.